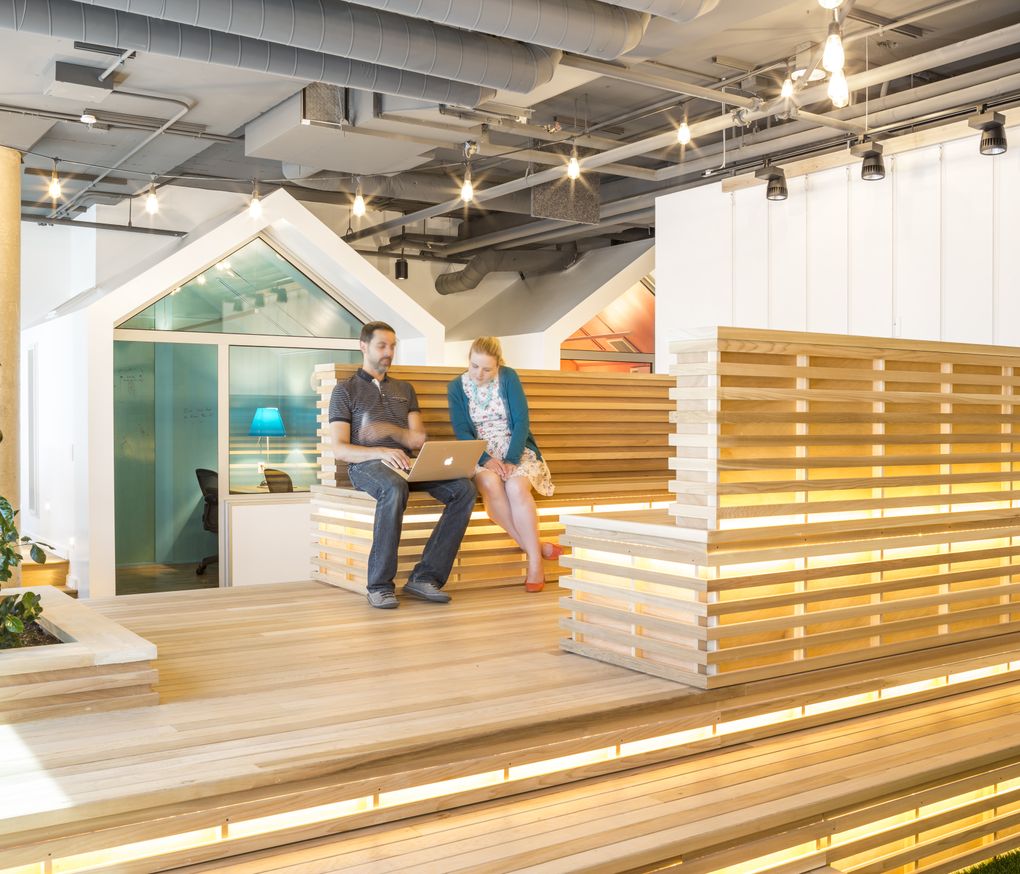 You probably don’t remember when Adam Levine moved into John Mayer’s former house. Or Madonna into the Weeknd’s. Or Alicia Keys into Eddie Murphy’s. But there’s something about the vibes of a place once inhabited by greatness. It served them well. You never know, maybe a little of their talent and good fortune is left in a cupboard or two. Maybe some will rub off.

When we moved our offices onto a floor of the former Shopify offices, it was difficult to deny a certain sense of transcendence. Tobias Lutke, Shopify CEO, summed up the design we created by saying, “This is the best office we’ve ever had. It has succeeded way past anything we had expected.” If there’s one thing the Shopify founder knows, it’s what works. And the office space does work. While nested in these offices, Shopify became Canada’s largest business. The Canadian tech wizards made 30 Billion Dollars between these walls. Those stats don’t need a lot of parsing.

When we converted ten storeys of an office tower, we applied the best evidence-based principles of high functioning office design. The result wasn’t just an innovative workplace designed to maximize productivity. It was a space focused on employee health and well-being.

We employed the same approach that we rely on for any project. Part of that is ensuring sustainability. The unique needs of Shopify’s growing business were considered deeply. But something larger happens. We think about people. The staff, visitors, partners and anyone who spent time under the roof were the single most important consideration. They always are. It’s the only way to attain a sustainability that flows from one purpose to another, from one company to many. Design for people and the space will succeed.

Ottawa’s downtown is defined by a somewhat circumspect personality. Organizations bump shoulders with a land populated by civil servants. Federal leadership has been careful, people haven’t fully returned to work. Companies have shifted the way interactions occur. But there’s still a need to create engagement person-to-person. Working remotely has its benefits – and a great many limitations. The former Shopify offices at Elgin have been dubbed “Ottawa's largest and most masterfully designed co-working space for businesses." The change from a single entity inhabiting the space to a co-working environment is one that makes a lot of sense. It allows companies to return on their own terms. The flexibility of being able to allow 1, 2, 10 or 50 people to return is the sort of advantage that companies can leverage at their own pace. Many teams are seeing hybrid returns as the path forward.

The site hosts work pods in an array of sizes. The outcome is appealing to start ups, established firms, and individuals. Having a mix of breakout rooms and dedicated workspaces outside of the pods allows workers to take calls or tuck away from their group for focused work.

The combination of unexpected zones for meeting rooms behind work pods or nooks and unexpected settings like the &quotcabins" or “sauna rooms” has the net effect of unanticipated productivity.

hen good design is imbued with lateral thinking like rent motility, we can make culture shifts that benefit every cog on the employment wheel. More and more people will be looking to gradually reintegrate in 2022. Spaces like the Elgin location that allow for rental on a daily, monthly or yearly basis removes the pressure on entrepreneurship and enterprise in general. It opens a window to collaborative work space that may help in alleviating a lot of mental health challenges that people have faced working in isolation. At Linebox, we’re enormous believers in the power of collaboration - seeing the space we designed used in a new way and promoting more of it brings a smile to our faces. It’s a reminder that philosophies of design are transferable. There is an immutability in those principles that can spur creativity regardless of who is occupying a space.

While we begin all of our projects by ensuring the identity of the inhabitants is infused in the design, there are always a core of elements that can be changed when new tenants move in. Our own work pod is getting a small makeover to instill our brand’s imprint.

It’s not so far removed from the empowerment that Shopify’s minds created for thousands of businesses while working under this very roof. Retooling the rules of commercial rental spaces means one of the lessons we learned from the pandemic can be realized more fully. The joy of not commuting was one of the few widely celebrated benefits of lock-downs. Companies are realizing that they can have offices on different sides of the city. The fifteen minute city is not only attainable, it’s here if we want it. An organization can champion work-life balance in a way that felt impossible not long ago.

150 Elgin is emerging as an intriguing incubator. Like its inhabitant predecessors, it doesn’t play by the normal rules. It’s destined not to nurture single businesses, but to generate networks within the city. This is the power of planning and design. It has a habit of leading to surprising evolution.

Every floor transports the inhabitants to a place quite apart from the scene beyond the windows. In something of a tribute to the grander panorama that the nation’s capital represents, one floor recalls Canadian motifs, materials, and references.

The use of unconventional materials, spaces, and textures achieve remarkable spaces that spark ideas. It’s a semblance of factors that establish a place as a hub for ingenuity.

Acoustics and lighting are meticulously planned. It’s incredibly important for the circulation or limiting of sound and light. The same is true for circulation of people through every space. The obsession with these details is what drives us. When all these elements work together, we can maximize quality of space. The Elgin offices have quality of space in abundance.

Each floor has its own theme. Though an ocean away, it’s a Scandinavian feel infused throughout the office that promotes a calmness in the middle of an urban centre. In an internal mirroring of this duality, there are “nooks” tucked away behind work pods where people can come together or work alone in a comfortable setting. A mixture of open spaces, semi-private nooks and alleys tucked into pockets along exterior walls, is the secret to encouraging engagement for all types of work activity, whether concentrated or collaborative.

Communal areas are common – we mean there are a lot of them. This isn’t accidental. The happy incidents it leads to are invaluable. At Shopify, whether in a kitchen or an open meeting space, the ability for people to come together without planning was central to creating a larger environment where people from different departments would meet spontaneously. Now the same force is working in the same way to engender a flow of people from a mix of companies and industries. The exchange of ideas merely intensifies.

On one floor, brightly coloured pairing pods, inspired by the cheerful fishing villages of eastern Canada, host two people side-by-side. Creating the vibe of such an office space might be challenging on a budget normally set aside for a smaller company. One space conjures the feel of a prohibition time speakeasy. There’s just something about an era evocative of restriction that makes you defy barriers. All of the meeting rooms were ahead of the curve, equipped for virtual meetings, expanding the scope of their reach from downtown Ottawa to the rest of the globe.

Detailing throughout the space was important. How materials come together in a practical and beautiful way. It’s interesting; it’s exactly what we’ve always demanded architecture and design to do for the people who pass through our buildings. We’re incredibly grateful for the opportunity to be part of the next chapter in this office space’s story.