A Space Is Only As Good As the Ideas It Fosters 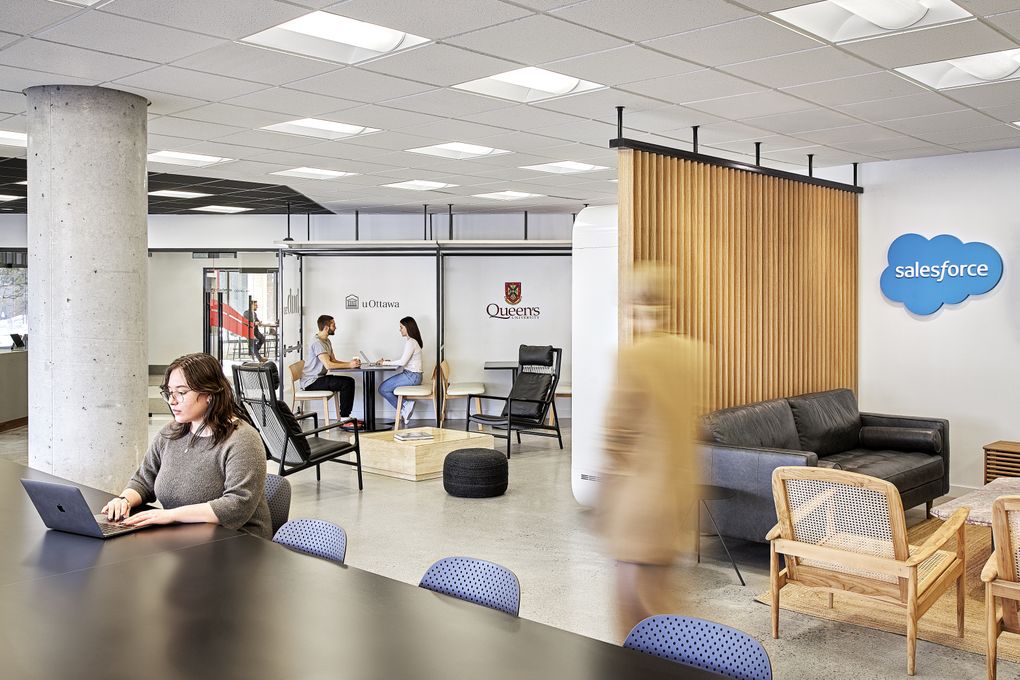 Getting the chance to design spaces at Hub350 was a bit of a dream. The project is a nearly 13,000 square-foot space, forming the entry to Kanata North, Canada’s largest technology park. In truth, it’s a very logical fit for us. But that didn’t lessen the impact of the win.

Linebox has somehow always been fortunate to be present at the precipice of Canadian tech greatness. When we designed Shopify’s headquarters, we saw their meteoric rise happen so fast, we had to design another space for them just to accommodate their growth. Of course, now famously, with the onset of the pandemic, they exited the in-person work-space realm and shifted (perhaps permanently) to remote work. For some, that’s understandable. And far be it for us to question the genius mindset that impels that ship. But at the same time, while we may have all seen some of the benefits of remote work, the majority of us have also come to understand the price of an absence of human contact. There's a mental toll that many have experienced, yes. But there’s a societal, industry and opportunity cost, too.

Hub350 addresses that head-on. It wasn’t conceived to combat any of this. After all, who knew the next tech disruption would be in tackling an emerging work pattern brought on by a global pandemic?  None-the-less, the brand new ecosystem for industry at 350 Legget Dr, less than half and hour from the Parliament Buildings in downtown Ottawa, is our latest office canvas.

But this project has a twist.

Unlike the headquarters we’ve designed for Shopify, ElementAI, Klipfolio, BenchSci and GSoft, the new Hub350 won’t serve a single company. It will serve a community. The design seizes the opportunity to meld minds from industry, academic and finance worlds. In the heart of Kanata North, there will now be a place for burgeoning businesses, entrepreneurs, newly-minted and future generations of skilled workers and investors to co-exist and collaborate. There is something about being in physical presence with others that, despite brilliant emergent IT, humanity just can’t replicate in the virtual world. Zoom meetings don’t allow for the accidental interaction that happens when in a meeting place designed to filter in experts and professionals from the 550 companies that surround the space or the 33,000 employees that work for the myriad of tech sectors they represent.

We’ve mapped out every office feature that has provided the winning model that’s helped propel tech start-ups to tech giant status and applied it to something like a community nerve centre. Open-concept meeting rooms allow for interaction with capacity options, while inviting the buzz of the energetic hub to keep the sessions lively. Smaller private offices deliver places for focus. Lounges offer the all-important down-time and a venue for more casual run-ins that so often end up being the forum for a brilliant solution. Soundproof booths can be used for powering through detailed work or sharing an idea whose genesis isn’t yet ready for public consumption. Seating areas and with presentation-style seating host a range of activities from relaxation to life-changing pitches made by founders intent on impressing potential investors. And to take the services and ideas to the wider world, there’s a full-service media studio. Producing stories and broadcasting promotional materials from a state-of-the-art studio like the one onsite rounds out the experience that will be available to so many Ottawa region individuals and businesses.

We’re excited by the depth of this project. Queen’s, Ottawa U, Algonquin College, Carlton U, Salesforce, Telus, and RBC are all anchor partners.

Having a physical space to foster businesses, thoughts, dreams and ideas with like-minded people is the legacy that will generate so many more industry-leading powerhouses. If the pandemic has proved anything, it’s that people need the inspiration of others to light and relight that spark that urges the germ of an idea into a grander success that solves problems, feeds mouths and changes lives. That’s a powerful thought that we don’t forget when we’re designing. Culture matters. And the way a space accommodates it can encourage it immeasurably.

The Kanata North Technology Park houses the second biggest sector in the City of Ottawa, just after the government in the downtown core. The ability to attract and retain knowledge workers relies on the type of thinking that is conceived at Hub350. In fact, it’s innovations like this initiative, that will drive tech talent from around the world to converge in the nation’s capital, increasingly tipping the balance of tomorrow’s technological generation in Canada’s favour. Being a part of it is an honour and it gives us endless confidence in the future of the Ottawa market.